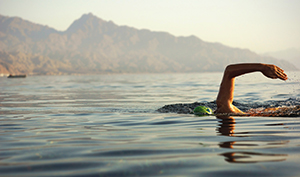 And now for something completely different

I am sat in the cold changing room having just finished my first swimming session with the training squad. Left, right and centre everyone’s talking about the big competitions they are training for ranging from Channel swimming to iron-man to Triathlons, some having lined up several throughout 2017. Someone asks me what my goal is for 2017. Stunned by the question I remain silent while thinking it through. After all I am only there to have fun! I am not stupid enough to torture myself with crazy Iron-man events or the Ice Mile (another story). The whole room goes silent as they are waiting on an answer. I mumble something and we move on.

A couple of weeks later, having gained some confidence in my swimming ability and swimming pace within the squad, I happen to find myself, quite accidentally, on the Henley-on-Thames swimming website forking out £100 and signing up for a 14K swimming Marathon on the Thames early August ’17!

Let’s get some facts in before I continue. The longest I have ever swum is 3K at a relatively slow pace in a lake in the Cotswolds…. Just the once! Now I am aiming nearly 5x that distance, plus having to prepare by swimming a number of 2K, 5K and 10K swim events.

A week went by and the enormity of the task began to dawn on me. Of course, it logically followed that the best way to proceed was to pile on more pressure by attempting to raise a large sum of money (oh, say £5,000) for Alzheimer’s Society, which is what I signed up to!

Alzheimer’s disease is the most common cause of dementia. The word dementia describes a set of symptoms that can include memory loss and difficulties with thinking, problem-solving or language. These symptoms occur when the brain is damaged by certain diseases, including Alzheimer’s disease.  During the course of the disease, proteins build up in the brain to form structures called ‘plaques’ and ‘tangles’. This leads to the loss of connections between nerve cells, and eventually to the death of nerve cells and loss of brain tissue. People with Alzheimer’s also have a shortage of some important chemicals in their brain. These chemical messengers help to transmit signals around the brain. When there is a shortage of them, the signals are not transmitted as effectively. Unfortunately, progress in diagnosing and treating Alzheimer’s has been very slow. This is partly due to immense difficulties in working out the science behind the disease, which has been exacerbated by a severe lack of funding for research. There is currently no cure for Alzheimer’s. In fact, we are a long way from understanding the fundamentals of the diseases. All you can do is to pop some pills that address some of the chemical imbalances in the brain, but this is only taking away the symptoms and is sadly not a cure.

The numbers speak for themselves:

As we age, we will be affected in one way or another by this disease, which brings me back to my story. Two years ago, my dad was diagnosed with Alzheimer’s and is currently under medication, with an unexpected side effect of enhanced detail in his oil and water colour paintings! But we know, this is temporary and soon enough Alzheimer’s progress will take away his passion.

I need your money!

In my quest to challenge my body and to raise money for Alzheimer’s Society, Fusion has stepped in by sponsoring me and contributing £1,000 into the fund, for which I am truly grateful. I am now going around to family, friends and colleagues with my begging bowl hoping to get achieve my fundraising target….although at this stage that target seems just as difficult as swimming the 14K on 6th August!

Of course, I am writing this blog and swimming this long distance because I want your money! I would be grateful for any contribution towards my Alzheimer’s Society fundraising by following this link: www.justgiving.com/keyvan-shirnia

Over the course of the next 5 months (gulp, is that all that is left?!), I will do my best to write down my experiences and challenges that the squad and I are facing. For those of you that know me, I love my work and so may on occasions mix some managed service lingo into the mix!!

Thanks for reading and catch up soon.