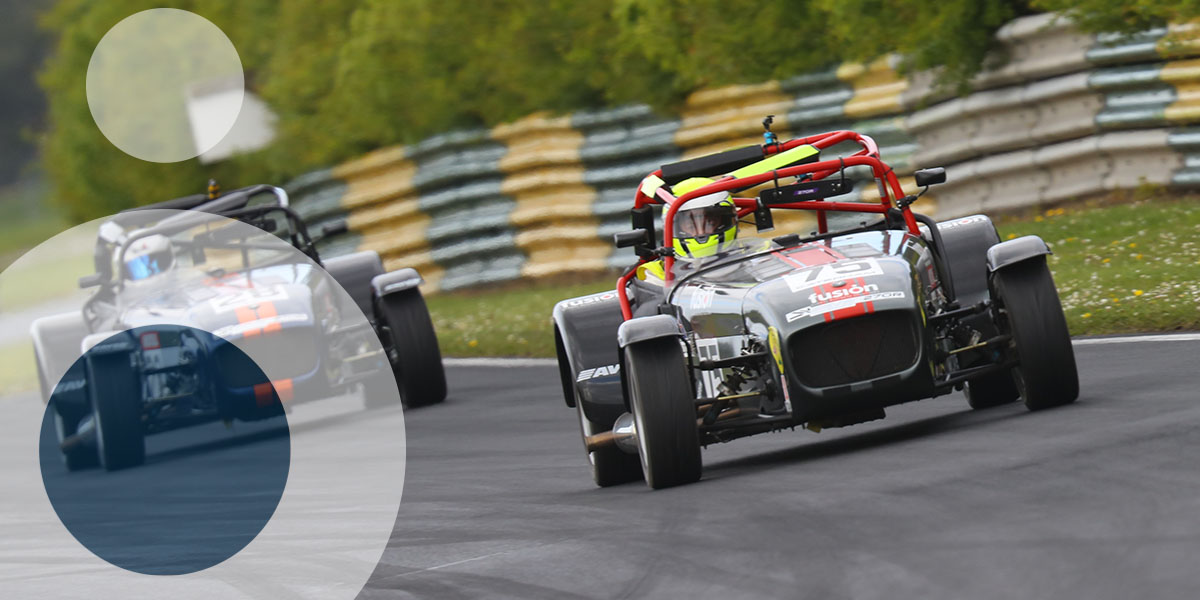 Thursday Testing & Saturday Qualifying – Back behind the wheel

After testing at Brands Hatch on Thursday, I ended up driving to a customer site in Worcester on Friday and then back down to Brands Hatch for the racing over Saturday/Sunday – so there was plenty of driving both on and off the track! Switching back and forth between racing and work combined with the changeable weather (everything from soaking wet to almost bone dry) made it extremely difficult to lock in a good setup.

However, after so many weeks off with my ankle injury it was mostly about getting some track time under my belt again. Changing gears was slightly more difficult than before my operation but I found ways to adapt and could circulate at an acceptable (albeit slower than usual) pace.

Come Saturday, clouds on the horizon looked to be bringing heavy rain. The timing was uncertain though, so I opted to go for a full wet setup along with roughly half the grid, with the other half opting for a compromise between dry and wet configurations. Ultimately my gamble did not pay off as after a brief shower the track dried rapidly, leaving me second from last.

Saturday was a dry race and I got an excellent start, making up several places. Unfortunately, it all went horribly wrong two laps in. A competitor attempted an overtake around the outside on Paddock Hill Bend whilst I defended my position using the inside line. I had left him plenty of racing room around the outside – and a little more!

Knowing that I would need to leave a car’s width on the exit for him, I broke a little harder and earlier to allow me to reduce apex speed. I expected the car on the outside to either run alongside me on the way up the hill and use that space, or possibly brake a little harder/feather throttle and tuck in behind to come up the inside instead.

However, halfway through the corner and on the outside, they began to tighten their line slightly. This was either through panic (seeing he was running out of road) or as an attempt to gain advantage. Their line was now intersecting my line… so instinctively I tried to avoid what is now clearly going to be a collision. But there is no spare grip as I am on the limit.

There is a short slide, no time or space to do anything about it, and a side to side contact. That contact turns a slide into a spin and poor Neal Evans following closely behind is left with nowhere to go – and he hits me in the driver’s side at somewhere around 60 mph.

The marshals, rescue & medical teams are on scene very promptly and had us both out of the cars within a couple of minutes. I was left a little battered and sore but otherwise uninjured, and immensely grateful for everything the volunteers did (and do) every race weekend for us – to help in precisely these circumstances.

The cars did not fare so well – Neal’s car was the most heavily damaged requiring a new “long front” (chassis forward of the engine bulkhead). Mine was a little better, although the list of parts was still fairly extensive, covering most of the rear drivetrain, all of the side impact protection on the driver side (sacrificed to save me), the exhaust and all related parts. It also needed a whole host of smaller components nestled in the top right corner of the bonnet that were destroyed when Neal’s car rode up on top of mine.

The below Video is from Neal Evan’s car (who ended up collecting my car in the accident) – I am starting to his left, racing number 75.

We all know the saying about opinions, and I’m sure everyone will have theirs. The stewards took the view that either driver could have yielded to avoid prior to the corner (absolutely correct), though declined to take a view on who should have (hence a racing incident). I respect their decision as independent judges.

That said – my personal view is still that when you are defending, alongside, on the inside, and you’ve left racing room so you aren’t slamming the door on exit… then you’ve done your part. If the roles were reversed and I were on the outside attempting the overtake, I would have either yielded or at least been mindful of the line taken by the driver to the inside. As otherwise, the gravel beckons.

Would I do the same again? No, but not for any other reason than standing on principles is a great way to rack up a big bill and little points. There is always another corner, another lap.

After seeing the stewards, the race was on to get the car repaired in time for Sunday – assuming I would be medically fit to race once the adrenaline had worn off and stiffness had set in. Caterham had to send staff to their base near Gatwick to get some of the more obscure parts and worked late into the night to get the car together and “stringed” (aligned).

Sunday, Race 2 – Patched up and ready to go again

I woke up sore but determined to “get back on the horse”, with both myself and the car cleared to race. My teammate and I worked flat out to make the final changes required to get the car prepared for yet another change in conditions – a race that started wet, then dried, and then would ultimately end up wet again. Applying a wet setup, I finished in time and Neal Evans was also able to make Race 2 despite the final repairs to his car being done in the assembly area itself!

Prior to the race I’d agreed with my (clearly stressed) other half to “take it easy”, since there had been no time at all to “shake down” the care post-repair. I also had a chat to Neal as he needed to collect just a few points in his own championship battle, so I made a gentlemen’s agreement to stay out of that (and to give him plenty of room). As a result, despite being over 0.75 seconds a lap faster than both Neal and the car he was battling in front of him, I duly held station. I came in last (excluding DNF’s) but the times showed what would have been possible had the gloves been off… Given the car was mostly a pile of bits the evening prior, I took this as a good result.

Sunday, Post-Race – Reflections and what’s next

It wasn’t the ending I would have chosen for the formal Caterham 270R season, but with my ankle and everything else that happened I have to think that perhaps 2019 just wasn’t my year.

I have one final non-championship race scheduled this year at Cadwell Park to evaluate the Caterham Graduates Championship as a possibility for next year – the other option being a 2nd year in 270R. There is also a long list of mechanical repairs to make over the winter alongside the usual overhaul. The car will need to be re-wrapped (given the extensive panel damage and replacement from the Race 1 incident) so I’ll need to finalise a colour scheme… Perhaps it’s time for a change!

Thanks again for your support, and I’ll be sure to keep you updated here on the blog!