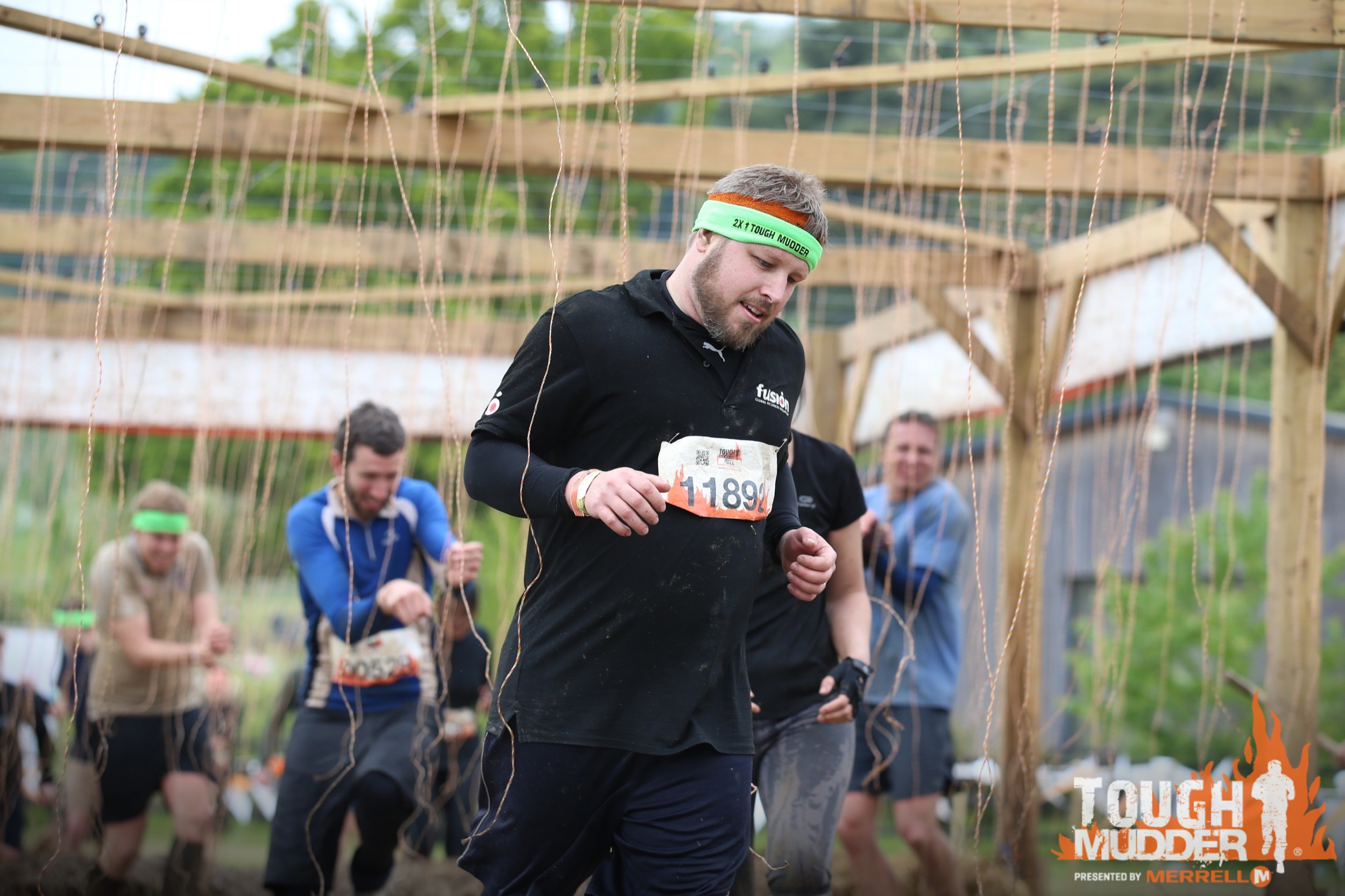 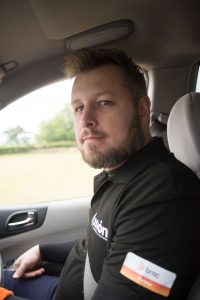 Some may be aware that 2017 is a year of change personally with a sponsored effort to lose 20kg. As part of this goal I decided to undertake some benchmark activities at intervals throughout the year to gauge my fitness and progress and also as a fund raising exercise.

The first of these was Tough Mudder London West, held just outside of Henley-on-Thames in Buckinghamshire. 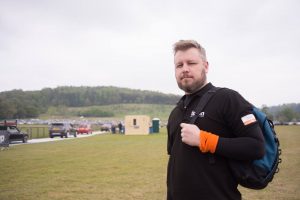 The day was a bleak and cold start with high winds and the constant threat of rain. I was delivered to a large field full of cars and the distant thud of high tempo music coming from somewhere on the other side of some distant tents and marques. I made my way in to the Tough Mudder Village, through check-in found the backpack check and ended up being seduced by the excitable crowd getting fluorescent face paint added to kill time. 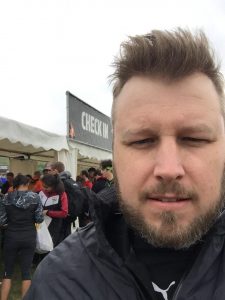 With my Diabetes UK supplied head dress I was ready to start and found myself in the coral for the group of starters in the 11:15am starting slot. We were all awkwardly bunched together. I was one of the few that had come alone without a posse of friends and colleagues to run the course with. A couple of other solo artists filtered out of the crowd as the announcer began warming us up and the adrenalin started pumping. We found ourselves teaming up for the group warm-up activities and shared some nods and knowing looks expecting the somewhat unknown course that lay ahead of us.

After the requisite stretches and lunges were complete the announcer went through the safety protocols and extolled the virtues of assisting one another on the course and then we were set off like a pack of half mad geese waddling up the bottlenecked path while we found our pace and standing among the rest of the pack. Very quickly we identified those that had trained and those that had just turned up, as within the first 100 meters people already began walking.

Now I had trained… not as much as I would have liked, but I was not the tubby man that had greeted the New Year and so I found myself keeping pace with the mid pack break-away that were not running hard but equally had not started walking. This continued till we reached the first obstacle. 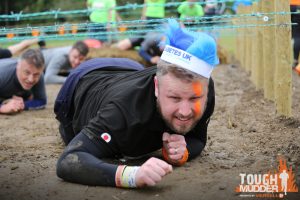 This was where the reality of the event set in as I lost my wig and tore a sizeable hole in my shirt on the barbed wire I was confident I was traversing with ease. To be fair, the wig stayed with me for another mile or so but this was about the time it started getting hot after the hill sprints when you began to notice people had discarded layers and thermals along the side of the course in the bushes. The wig found a place of pride on a post I passed where the Diabetes UK folks would get maximum exposure.

We found ourselves being broken-in on mainly running related obstacles before the more iconic challenges began. It was at this point I passed the first casualty on the side of the path being seen to by the medics. She seemed to be suffering some form of heat exhaustion. After mile 2, I began to very much question my decision to take part in this event and if I would be joining her due to cramp. 12 miles, what was I thinking?!

It was at this stage that they decided to make us jump down a slide into a pool of ice and flail about like drowning puppies. All jokes aside, we felt a lot better after the ice bath as doing hill sprints right away to try to bring our body temperatures back into the normal range. We then were herded to the mud. The mud mile (not a real mile) where we slopped through ditches and over mounds of dirt. Coming out the other end wearing an extra few kilos of sloppy filth in every sock, shoe and crevasse. The next obstacle was the pyramid. A massive slanted wall that you need to climb the bodies of others to traverse. Somehow I managed to find the most uncoordinated people in the world to assist up the wall as each of them, while standing on my shoulders, managed to rub their mud laden ankles into my head and fill my ears with mud.

Eventually we came to another water related obstacle in the Funky Monkey, a overcomplicated monkey bar challenge that was made nigh on impossible from the muddy grasp of the people who had gone before. Needless to say it was a great excuse for a full body dip to remove the caked on mud.

The End is Nigh

The obstacles kept coming and continued to be challenging but fun until we passed mile 11. At this point my legs were starting to cramp. My right thigh was seizing up and I was beginning to feel the exhaustion setting in. We approached Everest, a massive quarter pipe flanked at the top by those that had made it up to the top and had stayed to help reach down and heave people up that would sprint as high as they could manage and then lunge to grab their waiting hands. I watched as many tried and failed to make it up but I thought to myself, “I can do this, I’ve got enough left in the tank.”. I launched myself up and caught the hands of someone and then lost grip and slid back down the slope. I ran again and got up and held on but the guys trying to pull me up dropped me trying to adjust their grip. My third attempt,  I think I had attracted the sympathy of a few more at the top as I made it up and was being held in place but had no strength to pull myself up, let alone raise my leg up to help others drag me up. People managed to drag my exhausted carcass up in the end and I flopped at the top to catch my breath. Never before in my life have I felt so physically drained.

I stayed to help half a dozen more people up before leaving to hobble to the finish before my body completely seized up. As I approached the last obstacle there was another additional obstacle for those that have competed before, which I had. It was a series of gymnastics rings suspended over a crash mat several meters below. As I scaled the scaffolding I could feel my legs locking up. What was I doing?! I reached out for the first ring. In my mind all I could think was “falling is going to hurt a LOT”. I swung out on the first ring and my grip held, I had enough momentum to reach the second and get a good grp again. I was a little shocked! This was far better than I had expected to do. At that point I realised , “I can do this”. I reached out time and time again till I was on the last ring and my feet planted on the other side. I was more impressed in that performance than most of the other obstacles as I just had nothing left in the tank at that point.

The last obstacle was electroshock therapy. I jogged through protected from the jolts of electricity by my sleeves but absolutely spent. It was a personal best time for me. Previously it had taken me 4:35hrs to complete. My time without the standing about at the start was just inside 4 hours. 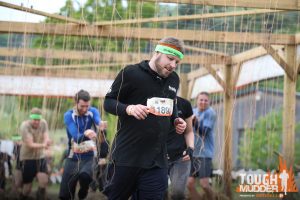 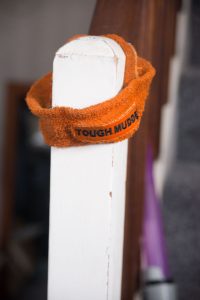 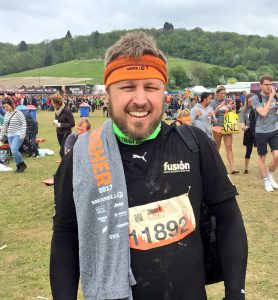 My purpose for taking part in Tough Mudder was 2 fold, personal fitness and fund raising. I’m 80% to my fundraising goal for this event and hope to raise £2600 across the year. 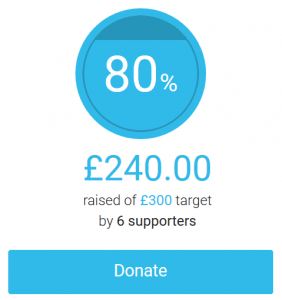 I’m supporting Diabetes UK as this is something I live with every day as my wife has type 1 diabetes and for those that suffer with it, it causes no end of challenges both physically and emotionally.

You can help me raise money for this great cause by donating directly to my fundraising page – https://www.justgiving.com/Daniel-Swann-Fusion.
JustGiving sends your donation straight to Diabetes UK and automatically reclaims Gift Aid if you are a UK taxpayer, so your donation is worth even more.
Thank you for your support!